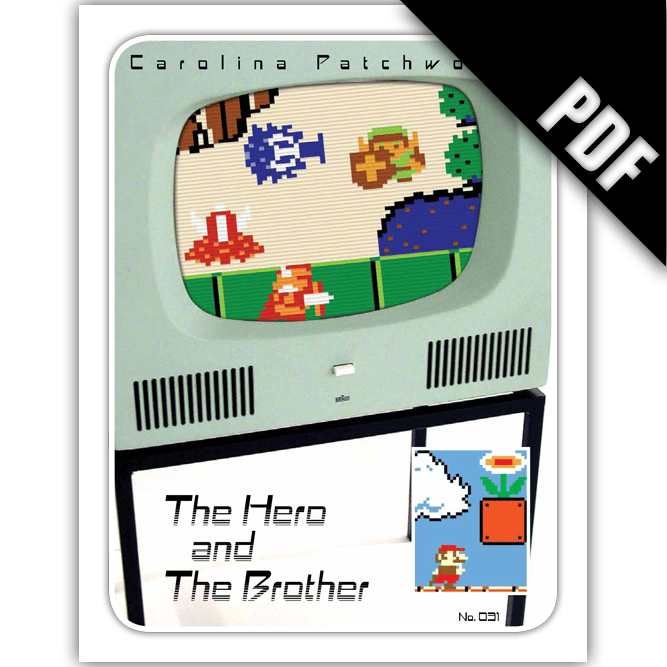 The Hero (based on The Legend of Zelda)
The Legend of Zelda may have introduced an entire generation to the joy of colorful worlds of monsters and heroes filled with melodies of bleeps and bloops, all contained in a little plastic box connected with wires to the TV. Bosses and Triforces, dungeons and new swords, secret doors and endless maps; these inspired fear and joy beyond anything a 256×224 set of pixels wavering on an ancient CRT had any right to do. Octorok and Leever threaten Link amidst the rocky Overworld’s bushes and water, as a Darknut patrols in his Underworld dungeon. Finished quilt measures 64" x 64" (162.5 x 162.5 cm).

The Brother (based on Super Mario Bros.)
In the decades since his first Sisyphian pursuit of a huge barrel-chucking gorilla, Mario’s legacy has built into mythic status. It was inevitable that some glorious day his epic battles with the infamous goombas and formidable (for turtles, at least) koopa troopas would be immortalized in that most ancient of media, the Quilt. In this smaller sibling of The Plumber quilt pattern, Mario finds a Fire Flower — and prepares to power up with fireball-flinging flower power! Finished quilt measures 40" x 50" (101 x 127 cm).

Pattern copyright 2010-2011 Emily Cier. Do not copy or redistribute, in part or in whole, without prior written permission, except for personal use. Quilts created based on this pattern are not to be offered for resale.